Opening Doors to a New Chapter

At five in the morning, on January 3rd, the last of my three oldest children left my home heading for her new apartment in a new city soon to be starting a new career. Prior to this change in her life, she was teaching in Japan. Before she left for Japan, I would tell her, teasingly, not to fall in love with a Japanese boy--I feared she would not come back to live in the states again. Turns out she didn’t meet a Japanese boy. Instead she met an American boy—an American boy in Japan, surprise! Both are back in the USA, and she has accepted a job in his home state. At least that state is only one time zone away from me instead of the 12 hours that Japan is making communicating sometimes tricky.

Watching my three oldest children leave my home to travel to their new homes is always a hard process for me. I become excited then I grieve. I become acquainted with happiness again upon remembering they have successfully made the transition to adulthood, and my job is done. When I brought them into this world, I knew at some point my children would leave, however I never fully explored how I would feel or behave when it happened. It was a door I wanted to remain shut. With each choice they made on their way to adulthood that door kept trying to open despite my holding tightly to the knob on the other side. It hurt the first time they left, and it hurts now even as I have learned to accept their living far from me in three different northern states—daughter #1 in New York, my son in Maryland and daughter #2 in Illinois.

Daughter #3 has a few years before she is off to college, so my home is not void of children yet. In September she also experienced a change in her life causing me to be able to spend less time with her—another opening door only this time it was forced open by me. After much thought, I decided to stop homeschooling her. Not because I no longer enjoyed teaching her or learning was not taking place, but because I wanted her to have a routine she could focus on if my health went in the wrong direction. Together, we worked to complete the application required in order to attend an early college high school program. She was unsure, but I knew this was the right thing to do. When the acceptance letter came in the mail she expressed remorse to no longer being schooled at home. I shared in that remorse, but also found I was relieved—still am; her next four years had a set course that would go on if I could not. She recently completed her first semester with an “A” in every class. It has been a wonderful change for her leading to my decision to seek a change in my life’s routine, too.

Never did I think I would be able to do this again in my life, but in November I applied, interviewed, and was hired to assist in teaching in a 21st Century Community Learning Centers Afterschool Program in a local public elementary school. In mid-December I worked four days before the Christmas holiday season began. It made me feel I was contributing to society again while also adding to my family's income depleted by my medical bills.

As I prepared to settle into my new routine with the beginning of the New Year, snow fell upon the East Coast including my state of North Carolina. Students went to school and then were sent home due to the predictions of traveling conditions worsening all before I set foot through the doors of my new employer in 2018. I must admit, it was a nice bonus to have a few extra days added to our holiday time and a nice reminder that every time my daughter is out of school, I am off too. Nice right?

When snow falls and the temperature is just right, snowballs and snowmen must be made. My daughter and I had a blast building Mr. Snowman with the rare three inches of snow that fell on January 4th. 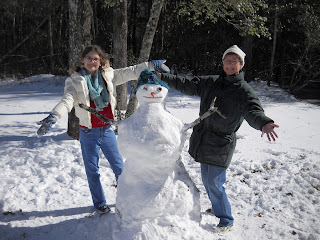 Scans for me are January 29th. I don’t want to think about progression, but unlike my children one day growing up and leaving home that I tried not to think about, I have to open this door because if I don’t I may take too long to recover from my resulting grief. I role-play in my mind how I will react if the news is good or if the news is bad. If the news is bad, I know I will revisit despair, but I also know I will not travel there too deeply because I have already been there. I know now, too, I must stay focused on the things I wish to accomplish in my mortal life. In the meantime I will continue hoping for "no evidence of disease" on this next scan. If it isn’t then I will deal with whatever that entails and deal with that new chapter.

Perhaps it is cliché to talk about life’s changes as chapters, but for me that is truly the best description of all the changes that happened in 2017. My oldest children are working and doing adult things; my youngest is now in public school; I am getting paid to work. These are huge changes for me; ones I never thought I would see. Changes that have given me a new chapter in my life that hopefully will continue for the 360 days left in 2018. Maybe even beyond.

Posted by The Cancer Classroom at Friday, January 05, 2018