The Oldest Person that Ever Lived/Possible Progression

When I was a young girl, I thought I would live to be the oldest person that ever lived. The thought left a smile on my face; it made me feel special.

In June, Dr. R. and I reviewed my scans. She gave me a copy of the report completed by a radiologist in Wilmington where my scans were done. I searched for the words “no evidence of active metastatic disease”. This time, those words were not typed on any of the white pages that contained the radiologist’s findings.  My oncologist, who doesn’t get too excited about anything really, never did give much attention to those words that meant so much to me.

On Monday, August 17, I met with my oncologist again. During our last discussion she said she would ask her in-house radiologist to interpret my scans. Today, I would learn those conclusions.

I threw my arms into the air above my head and did a little happy dance.

With cancer, any good news is great news. My platelet counts are slowly recovering from the onslaught of full-dose TDM-1. Reducing the dose has worked!

That doesn’t change what might be happening with my cancer.

My local radiologist’s report stated there is a “7 mm right middle lobe nodule . . . present in this area since 10/15/2014 at that time it measured 3mm.” The report I received in October said nothing about the presence of this or any other nodules.

Suspicions confirmed, not all is revealed to the patient.

After washing her hands, Dr. R. sat down on a swivel stool. She asked how I was doing then answered a few of my questions. Soon, she turned to the computer on the desk to her right. Her fingers moved quickly across the keyboard until she found the report made by one of the radiologists that is part of her team. She quietly read the conclusions eventually turning to me to explain what she had read. This new report stated there is a nodule that was previously 4 mm in the middle lobe of the right lung now measuring 8mm. She continued to explain that there had been three suspicious nodules in the middle lobe of my right lung which were being followed with each new scan. One no longer was picked up on the scan (disappeared), one was calcified indicating scarring from a possible illness I had had in my life, and the nodule prompting questions may have changed with an increase of 4mm. Dr. R. was not able to say if this meant progression or if it was absolutely cancer or not.

That stupid nodule may have doubled in size! She was not sure if it was cancer! Let’s be honest. What else could it be?  Okay, it could be scarring. But, scarring doesn’t increase in size plus there are no calcified areas to indicate scarring. Yes, I understand CAT scans have their limitations and may reveal something different on each scan. So here I sit today, writing, trying to organize my thoughts in order to help me not be so terrified.

I tell myself what I tell my youngest when she is scared.

It seems to make her feel better. For me, it just doesn’t have the same effect.

Dr. R. said no one can say exactly what it is right now. Sometimes progression is not definitive until after several scans.

She said the nodule is too small, and it would be too dangerous to get tissue from it for a biopsy. As I and many others have stated, cancer is so much more complicated than news reports disclose to the public. If my fears become reality and this is progression, it is because that particular 8 mm piece of death has evolved into a killing machine that has cells that are no longer responding to my current drug.

Inside every cancerous tumor there are cells that are constantly evolving. Each cell does not look exactly identical to its parent cell. The complexities are endless so don’t believe the simplistic notion that a cure for cancer is going to happen soon—possibly for a few types, but the majority will not be cured so easily. Plus, think about how many cells must be destroyed before a person is freed from this disease. Elaine Shattner, a doctor I follow on twitter, tweeted (or may have retweeted) “There are about 1 billion cells in a 1 cm tumor. . .” Although some of the cells may no longer be living or are dormant--which is a major problem--within each tumor, there are so many of these tiny monsters that need to be destroyed which adds to the difficulties in curing cancer.

Modern diagnostics show details far greater than in our past, but medically educated people still cannot tell exactly what everything is from a scan alone. Much of medicine is “wait and see”.

So, I figured out that although my reports over the last year contained no description of nodules in my right lung, there were in fact at least three that were being followed. Those have remained unchanged over the course of my treatment until now. I am guessing since those nodules were not changing, they were not included in any of my reports. The report for my oncologist probably did.

For now, I must wait for my next scan in September to reveal any additional changes in the nodule before my doctor along with a radiologist will decide if this is progression or not.

That day in June when I left the land of no evidence of disease, I am afraid that my time with TDM-1 (Kadcyla) is nearing the end. My mind is preoccupied with it. I feel panicked that I won't have enough time to finish all that I need to do.

I wish I could think like that silly little girl I used to be. Far removed from the idea that she would someday be destroyed by cancer.

I will not be the oldest person that ever lived.

Damn.
Posted by The Cancer Classroom at Saturday, August 22, 2015 No comments:

Up-Date on Platelets and Infusion #22 of Kadcyla/TDM-1 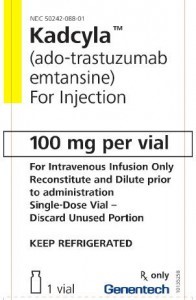 Two weeks ago was a very good day for me. My platelets were 88,000/mmᶾ of blood which means they had improved enough for me to be treated. The dose remained reduced in hopes that my platelets will remain above 75,000.

The nurse practitioner and I discussed my current treatment plan with regard to my drop in platelets. She decided that I was being treated rather conservatively and according to the drug’s package insert I could be treated even when my platelets are close to 50,000/mmᶾ. So, 50,000 is my new targeted number. I will be back on my every three week schedule as long as my platelets don't dip below this number.

Though I did not verbalize the question, my NP answered a question that has been sitting in my brain for a while. “If TDM-1/Kadcyla is a targeted therapy then why are my platelets affected?” Kadcyla is ado-trastuzumab emtansine. Trastuzumab is Herceptin. It targets the Her 2 neu protein on the outside of my tumor cells. Emtansine or DM1 is a powerful chemical attached to the Herceptin molecule.  As Herceptin reaches those cells with excess Her 2 neu proteins it attaches to those proteins and eventually deposits the DM1 drug inside the cell. The DM1 then targets another protein, tubulin, causing the cell to die. Sometimes some of this drug breaks free before it reaches the cell and travels throughout the body hence the reason I am having one of the more common side-effects--low platelets. Some Herceptin never reaches its destination either causing side-effects of its own. go to link -- How Kadcyla works
TDM-1 also has a longer half-life than other drugs so it stays in the body longer.

"A drug's half-life is the amount of time it takes for a drug to lose half of its strength in blood plasma. This is most easily measured in medications administered through an injection or IV drip."
Explanation of half-life link.

It was a relief to be treated again. I felt like I was no longer swimming in the ocean without a safety net while sharks circled me, waiting.

Posted by The Cancer Classroom at Monday, August 10, 2015 No comments: