Treatment #16 went well, but it was an incredibly long day.  Chapel Hill had too many patients scheduled which caused long waits for everyone.

I only had one appointment, the infusion.  Because of this, I thought the time at the hospital would be a lot shorter than prior days.  I arrived at 11:30 despite my appointment time of 1:00.  My early arrival did not move things along any faster. I was not seated in a treatment chair until just after 3:00.  Finally at 4:30, my treatment began.  The whole process really doesn't take that long.  Once I swallow the two Tylenol pills and wait the 30 minutes for those to start working, the infusion can begin.  Each drug is infused for 30 minutes. There are two of those.  Once complete, there is a 30 minute observation period to make sure I don't have an allergic reaction to the drugs.  So, one might surmise that I could possibly be on my way home in three hours since the actual time to be treated is two hours.  This was not to be.

Luckily, I had received a gift from one of my daughters on Saturday.  It was an iPad mini!  I spent the entire time learning how to use it.  I searched the internet and did something I never do . . . played games!  Candy Crush is a game I knew nothing about, now I do.  Temple Run, oh my, what fun!  My husband laughed at me because the game involves a lot of finger swiping across, and tilting of, the screen.  My motions were much bigger than was needed for the game.  I guess if I was watching someone play in this way I would find it funny too.  On the way home I was so into the game I accidentally tossed the iPad right out of my hands. The iPad is fine despite its short trip through the air.

My sweet, wonderful daughter used the money she made working in a restaurant to bring me this technology. She wanted me to have a new computer. The one I have is bulky making it cumbersome to carry around.  Plus it is several years old which for a computer is ancient. Attached to the gift was a poem she had written.  It expressed how she knows how awful it is to be sad and how she wished she could grant wishes. With those wishes granted, she could fix things. Since she can't, maybe with this gift, she could make things for me a little better. And, she did!  While I was playing the games and learning how to use the device there were moments I did forget my sadness and actually enjoyed myself despite being hooked-up to a drug delivery pump.

I love all my kids!

Posted by The Cancer Classroom at Thursday, March 20, 2014 2 comments:


I learned something new!  The new learning began to unfold many weeks ago and finally peaked on Monday, February 24th, when I met with my oncologist.  Prior to this day, I had discovered that there are other cancer types that over-express the HER 2 neu protein receptors like my breast cancer cells do.  Not only do some cancers, but normal cells have these receptors too.  It is only when there are too many receptors that the cell becomes dangerous.  With all of this information, I began to wonder about the two drugs that are part of my treatment plan, Perjeta and Herceptin.  Before this new knowledge became part of me, I understood these drugs to be targeted therapies.  The word “targeted” to me meant that the drugs only affected the cancer cells. When I met with my oncologist on Monday, I asked her a question.  Her answer has totally changed my understanding of how the two drugs I am currently taking affect my normal cells.

Let me provide some background information.

There are different types of breast cancers.  The ones I am going to address here are cancers involving certain receptors.  Normal breast cells have three types of receptors:  estrogen, progesterone, and HER 2 neu.  Breast cancer cells can have all three receptors, two types, one type, or none at all.  These receptors are within each cell or on the surface of each cell and give signals to the cell’s nucleus for the cell to grow and divide.  Two different receptors use the hormones estrogen or progesterone to send those signals.  The third type of receptor is HER 2 neu (Human Epidermal Growth Factor Receptor 2) located on the outside of the cell.  It does not use hormones, but still sends signals to the nucleus telling the cell it is time to grow and divide.  (There are other HER receptors, but I am not going to complicate things any more than needed.)

The estrogen positive cancers (ER+) are the most prevalent.  One way to control this type of cancer is by reducing the amount of estrogen in the body.  Since the estrogen is needed by the receptors to grow and divide, reducing it reduces the receptors ability to function.

One way to stop the HER 2 neu type cancer is to intercept the signal the receptors are sending to the cell to grow and divide.  Herceptin and Perjeta attach to those receptors.  Then the cell no longer receives, or at least receives less of, those signals that are causing them to grow and divide abnormally.   The first picture below shows the HER2 neu signals being sent to the nucleus, and the second picture shows the drugs attaching to the HER 2 neu receptor and blocking the signal to the nucleus. 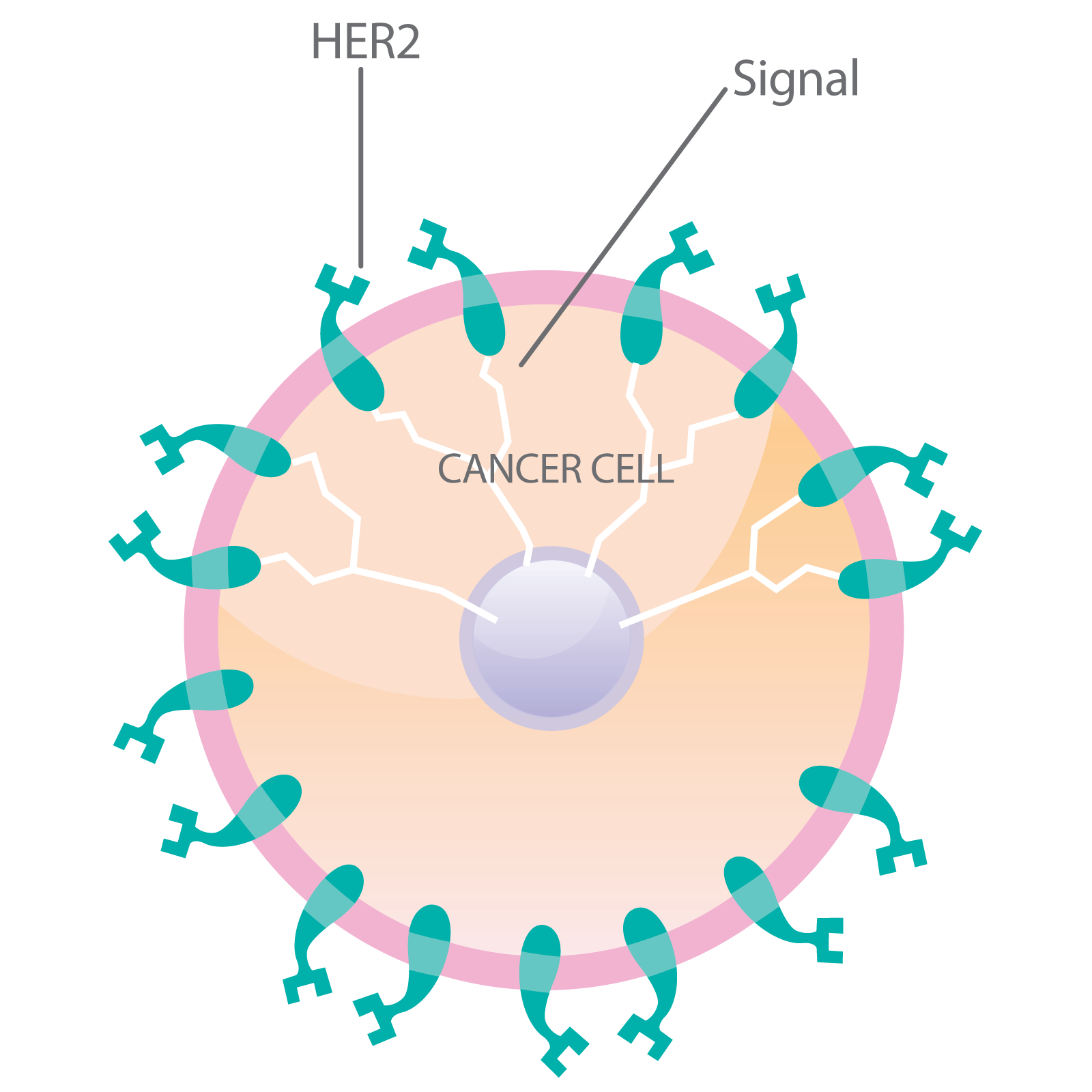 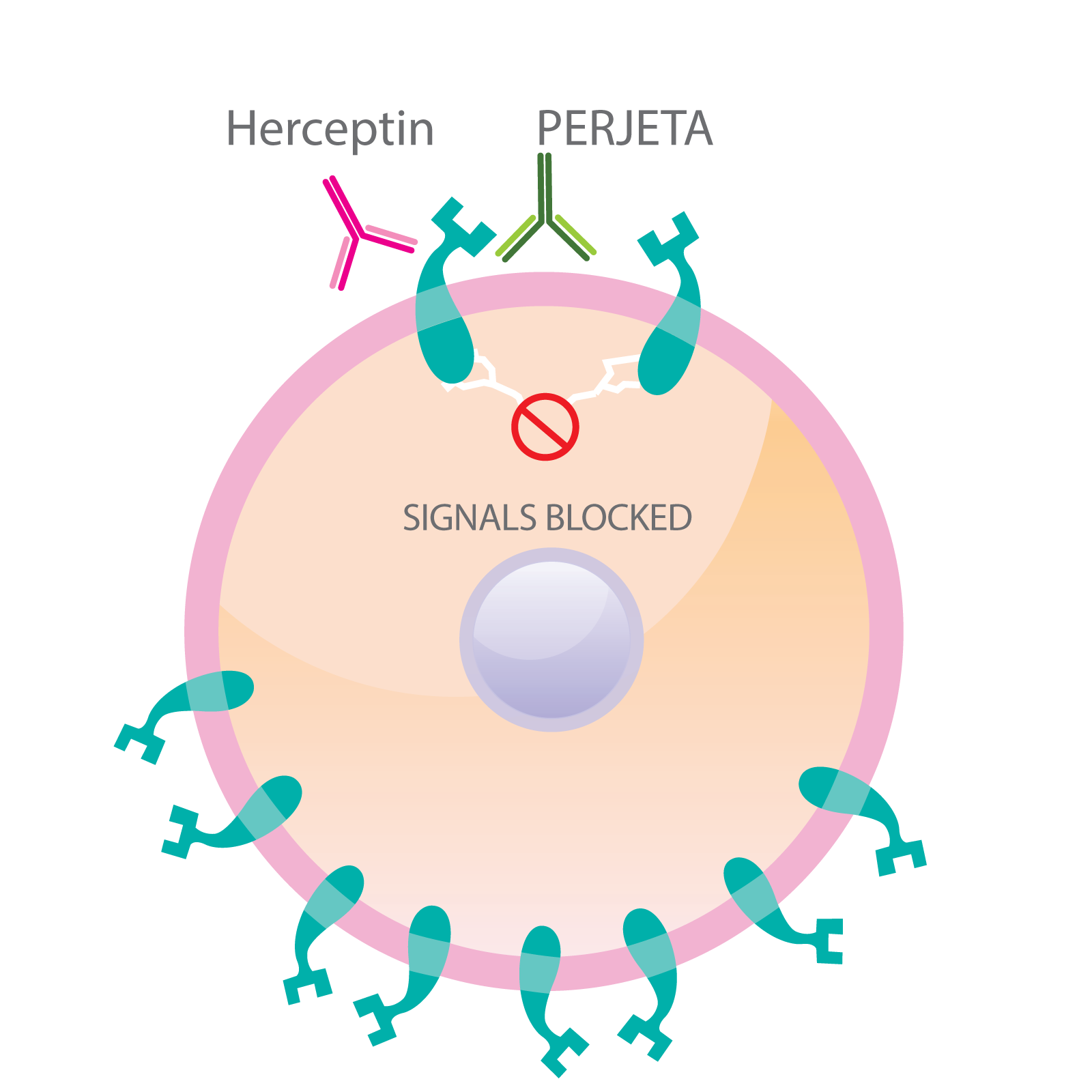 The reason Herceptin and Perjeta do so well together is they attach to different points on the HER 2 neu receptor producing a better blockage of the growth and division signals.

I can’t remember when I learned that normal cells also have HER 2 neu receptors.  It wasn’t until the last few weeks though that I began to wonder if Herceptin and Perjeta were attaching to the HER 2 neu receptors on my normal cells too instead of just to the cancer cells.  That brought me to pose this question to my oncologist when I was in Chapel Hill to receive my #15th treatment for this disease.

I asked, “Since the normal cells have the HER 2 neu receptors, like the cancer cells, how do the normal cells continue to work properly if their receptors for growth and division are blocked by Herceptin and Perjeta?”

Dr. R explained that normal cells don’t rely solely on those receptors to grow and divide.  So, though the drugs interfere with the signals from the HER 2 neu receptors it is ok because the normal cells use other pathways for this function.

After our conversation, I understood a little more about Perjeta and Herceptin.  They are “targeted” therapies, but "targeted" does not only mean that they target cancer cells only.  The target is the HER 2 neu receptor.  Normal cells are affected too.  In the future this learning may change.   For now I understand that since cancer cells are not functioning normally due to the high number of protein receptors bombarding them with signals to make new cells rapidly, the breast cancer cells are responding to those HER 2 neu signals only.  Because of this, the drugs are effective.  Overtime as those receptors are blocked by drugs, the cancer cells in their quest to stay alive, will find ways to overcome the blockage of those HER 2 neu receptor signals.  Other pathways for growth and division signals will be found and the damage will continue.  That is why eventually all drugs will no longer work against breast cancer.

Now that I have this new information, it causes me to wonder about other aspects of how these drugs work inside my body.  With the millions of cells in my body, if the drugs are attaching to the receptors of normal cells too, is there enough of the drugs given to me to attach to the cancer cells too?  So complicated. . .  I am going to hope that the clinical trials conducted long before I received these drugs already determined what amount was necessary to affect the cancer in the most potent way possible.

Another treatment is over for me.  My next one is in two weeks.  I won’t see the doctor on that day but will see her three weeks after that.  At that time, we will schedule a scan.  Oh, the never ending scary scans.  Such is the life I lead.  For now though, I think I am doing well, all things considered.

The above information is based on my understanding of breast cancer and the drugs that are currently in my treatment regimen.  Please check with your oncologist for accuracy.
Posted by The Cancer Classroom at Sunday, March 02, 2014 2 comments: