Sometimes cancer sits in my mind quietly. Those are the best of days. With my scan results bringing good news at the end of June, my summer hopes became plans.

Before launching into my biggest plan of the summer, I took a short trip--well, two hours one way--to see a friend who was staying in North Myrtle Beach. Our history goes all the way back to the late 80's. Shortly after she moved into my apartment, we became friends. Sharing the same birth date in November was a bonus to our relationship. On the day we turned 21, we waited till 12 am to go to a bar and have our first legal drink. That day would not have been the same if Kay had not been a part of it. Our recent time together was short. Nevertheless, I enjoyed every minute.

As the end of July approached, I had everything in place for our grand trip taking us through several states. The reason for this trip came as a result of my daughters, having just graduated from college, heading to their first post-college jobs. They were moving far away from home, and I was determined to take part in it.

Leaving the men at home to work and take care of our many animals, the girls and I embarked on this whirlwind of a trip. Before going directly to the places my daughters needed to be, we took a few detours. One to see an old friend and another to spend some time with my sisters and their families. First, we headed southwest to Atlanta, GA then north to Georgetown, KY, on to Cleveland, OH, east to Washington DC, and finally, we traveled south toward home. With dozens of hours passing and many miles of road under us, our journey was executed with only a few unexpected events along the way.

Since my van's odometer shows a number close to 330,000 miles, we decided to rent a car--a brand new black Kia Sorento. The pick-up when I pressed the gas pedal was appreciated, but this old body of mine was wishing I had the familiar seat of my van putting me at just the right height for the sun visor to keep the blazing ball of fire in the sky from hindering my ability to see all that was before me.

Our first stop, Atlanta GA, is the home of a woman I met during my first chemotherapy infusion in 2009. She was a fantastic walking partner—fast was her only speed. As we walked she lent me her ear while I lent her mine. We shared our fears, struggles, and laughable moments through chemo and beyond. Almost a year ago, she moved away from Wilmington, and I had not seen her since.

After an evening of pizza and conversing, we settled in for a good night sleep. The morning brought hopes of a good day for travel. Meredith prepared coffee, and we spent time enjoying the morning air from her back porch. Her breakfast sandwiches were eaten and time passed too quickly. A few pictures were taken, our farewells were said; Kentucky was waiting.

As we drove my youngest daughter saw unfamiliar landscapes that brought awe to all of us. Living near the coast, land is mostly flat so mountainous views bring lots of oooh’s and ahhh’s. Such amazing work has been done by people constructing roads and buildings on the sides and over the tops of mountains. We marveled at the beautiful fields that could be seen for miles upon miles. Where we call home there are miles and miles of farm land, but it is not always easily seen. After a few acres, without the benefit of being atop a mountain, trees eventually obstruct our view.

We reached my sister’s home about an hour behind schedule—not bad I thought. Upon arrival our adrenaline raised a little as we prepared for what we were about to do. My sister and her family live on the side of a hill with a waterway below—actually just one continuous mountain if you consider how high we were above sea level. The decent of her driveway is quite unnerving if you don’t do it often. The small hump at the top sent our vision over the treetops. Then the nose of the car began to point downward—yikes! Thankfully, our brakes were in peak condition so we didn't slide into her garage.


Dinner was prepared that evening and good conversations were had by all. The following day we went into town to see my sister's dog grooming shop. It was beautiful. Funny way to describe a fur-cutting assembly line I know, but it was BEAUTIFUL!—clean, organized, ready for business.

Throughout that day our children were getting along splendidly making this visit one of the better ones.


Next, as was planned, we moved all our things from this sister’s house to my other sister’s house so we could spend time with her and her family. She lives in the same Kentucky town so it was an easy transition. We had plans to go to the zoo, but with the temperature in the upper 90’s and the threat of rain we stayed inside. That evening everyone moved to her backyard for some good fun playing corn hole--basically horse shoes with bean bags.

The following evening my sister treated the kids to roller-skating. I sort of regret not participating, but I had a nagging thought, What if I break my leg or worse. So I refrained. Instead my sister and I chatted while watching the kids and her husband cruise along on their wheels. Well, most everyone cruised. My youngest daughter had never been skating before so her cruising was stop and go. That didn’t prevent her from enjoying herself despite the many bruises inflicted to her knees with each fall.


Cleveland, OH was our next destination. It would become the new home for my eldest--by 20 minutes--of my twin daughters. As the miles increased on our odometer, the sites of the Cleveland area came into view. Gone were the rolling hills of Kentucky and Ohio. What we saw were acres and acres of concrete roads and buildings rising out of the land. Steel production and other industry were evident everywhere. All of that was forgotten though when we reached the district where she would be working. The efforts to bring theater to Cleveland and energize the city were visible. One odd attraction is an enormous outdoor chandelier in the middle of the theater district. It is certainly unexpected but eye-pleasing nevertheless.

While taking in the sights of the rest of the city, two billboards caught our attention: 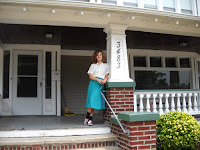 Excited is one way to describe how my daughter was feeling as we toured her new home. The living accommodations, I found were beyond my expectations. I felt comfortable leaving her there, but I couldn't hold back a few tears as we said our goodbyes on her new front porch.

After moving her things into her new home which she will share with 15 other people also working for this theater production company, we headed to our nation’s capital. Despite some rain limiting our visibility, Pennsylvania, Maryland and Virginia were beautiful from the viewpoint of the roads we traveled. The greenery of the farmland was spectacular.

My second daughter was due in DC the following day for training in preparation for her new job. The group would fly to Japan the day after to spend the next year helping Japanese children learn English. There was no way I could take her to Japan, so I had to accept that Washington DC was my stopping point.

As we were approaching our exit for the hotel we had booked in Virginia, we heard the sound of metal scraping against metal on the right side of our car. Feeling a jolt, our car was pushed slightly left. It took me a few seconds to adjust my brain to what was happening. We had been hit. The gray Toyota Camry that side-swiped us sped up and moved in front showing no sign of stopping. My daughter sitting next to me called 911 while I pursued the car to get the car’s plate number. I blew the horn hoping to get some kind of reaction from the driver. Mostly I blew my horn because I was mad. I had done my best NOT to damage this car and this person changed that. How careless and all in an effort to not have to get behind me as a line of orange barrels forced traffic to merge into my lane.

As I followed the hit-and-run offender my daughter read the tag number to the operator. The 911 operator insisted we stop following and pull over, so we did. Our location was relayed to an officer who arrived quickly. Behind him another patrol car parked. The first officer gathered all the information. Then after asking me to follow him to a safer area to park, he asked that we wait. He and the other officer left to find the driver. There we remained going over in our minds and to each other what had happened. Once the two men returned, I was given the driver’s insurance information and a few other details that my insurance company would need--incidentally the driver lived close by. I asked the officer what the driver said about the accident. His reply was, “She doesn’t remember hitting you.”

“Around here a lot of people say they aren't aware they hit someone." Based on our conversation prior to my question, his response suggested to me that where he once lived, in South Carolina, people didn't drive like that. The officer ended our conversation by telling us to be safe. I closed my window, put the car in drive and began listening to the familiar voice of the GPS guiding me to the hotel.

Weary, hungry, and thankfully unhurt, we made it to the hotel parking lot as the midnight hour approached. It was much later than we planned, but we made it. 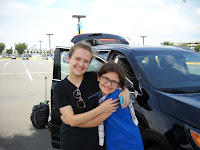 On the final day of our trip, we went to Dulles International Airport to see my daughter spend her last few hours on US soil; for now Japan would be her new home. As she was walking to greet her group and my youngest daughter and I were walking back to the car, she turned in our direction. We turned at the same time finding her smiling face and her hand waving goodbye. Those moments when goodbyes are necessary, I try so hard to make them a permanent visual memory. Because living is fraught with uncertainties, the "what ifs" pounded inside my brain. It was hard, but we waved back.

My youngest and I, settling back into the car less weighted down with suitcases and people than when we started, began our drive home. Movement for a long while on an interstate in Virginia was slow. We never saw an accident, but there must have been one. Traffic was inching along on another roadway as well making sitting exhausting. This was all unexpected since it was not rush hour traffic. It was a Saturday for crying out loud!

Once we were in North Carolina we sailed home. “Nothing could be finer than to be in Carolina”--to use a line from an old Dean Martin tune--describes exactly how we were feeling. A familiar world met our eyes. After nine days of traveling and approximately 1,800 miles later, we made it home.

Posted by The Cancer Classroom at Saturday, September 03, 2016