Please consider: If you or your child has not been diagnosed with cancer and feel you are at risk for any cancers because of family history, DO purchase life insurance before pursuing care for a potential diagnosis and before any genetic testing that could lead to a positive result if it would be helpful to your family. Positive results may inhibit your ability to get life insurance.

I met with a genetic counselor on 7-17-17. Our conversation was informative causing me to have one of those “what if” moments. When I was in college in the 80’s, I entertained the idea of pursuing genetic counseling as a career, but in the end did not. To this day, I continue to find genetics fascinating. This post is my attempt to simplify a very complicated genetic condition found in some breast cancers. If you have any questions about the BRCA 1 and 2 genes, please speak to a geneticist for clarification. 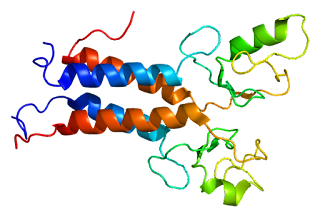 All cancers are genetic, but not all cancers are inherited from a person’s parents. Hereditary cancers make up around 10% of all breast cancers. The other 90%, as far as scientists know presently, are random mutations or possibly caused by certain environmental exposures.

In each of us, our cells hold the code that make us who we are. This code is called our DNA. In it are 46 chromosomes—23 from our mother, 23 from our father. Within each chromosome are different numbers of genes. Chromosome #1, for example, is large and has approximately 2,000 genes. Each gene holds instructions to create proteins that tell cells what to do.

In breast cancer, two inheritable genes were discovered in the 1990’s—BRCA 1 & 2; BRCA stands for BReast CAncer. More recently, geneticists found another gene called PALB2—Partner And Localizer Breast cancer 2. It partners with the BRCA2 genes. A person who has a mutation on any of these genes—inherited or not—has a higher risk of having breast cancer.

BRCA 1 and 2 are tumor suppressor genes and their particular proteins handle the DNA repair which work to stop cells from becoming cancerous. These two important genes when working properly monitor DNA mutations throughout the various phases of a cell’s life.

The PALB2 gene affects how the BRCA2 gene works. Sometimes, the BRCA2 gene will have NO deletions or alterations, but there is an alteration or deletion of the PALB2. This can shut down the BRCA2 gene’s efforts in preventing a cancerous cell from developing. Once that cell becomes cancerous the damaged PALB2 gene allows for the continued replication of the mutation because it is no longer working with the BRCA2 gene. That is why drugs for this problem are called inhibitors; in this case PARP inhibitors. Those drugs stop the PALB2’s influence on the undamaged BRCA2 gene so it can once again do its job of stopping cancer.

During my meeting with the genetic counselor, she drew a picture showing how the BRCA 1 and 2 genes work in breast cancer. 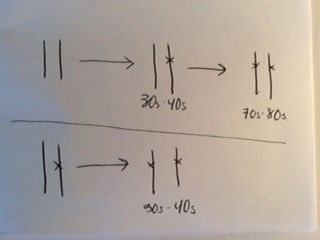 This is my understanding of what she explained to me concerning these genes:

We inherit two BRCA1 genes and two BRCA2 genes; one of each from our parents. (The picture shows 2 copies of either the BRCA 1 or 2, and this simple drawing demonstrates two situations that can occur. The small x’s represent alterations or deletions of these genes.)

When we inherit two perfect copies of the BRCA 1 and 2 genes—as the upper part of the drawing depicts—any future breast cancer would not be caused because of an inherited altered gene.

Though a person did not inherit a damaged gene, sometimes a mutation can occur in one of the paired genes in our 30s or 40s. As long as its partner gene is still working, no breast cancer will arise from this mutation. But if the partner to the pair becomes defective during a person’s lifetime, breast cancer can appear in a person around their 70’s or 80’s.

If we inherit one defective BRCA 1 or 2 gene—shown at the bottom of the picture—the other paired gene could become mutated in our youth, causing breast cancer to arise in a person’s 30’s or 40’s. The risk of breast cancer is increased but does not mean it will occur.

If we inherit two altered or defective genes in either the BRCA 1 or 2 pairings, there is an even greater chance that breast cancer will arise.

In 2005, I had testing for the BRCA 1 & 2. My result was negative. Today that testing is considered incomplete.

Monday of this week, the genetic counselor and I reviewed my, and my family’s, medical history to see if further testing would offer helpful health information for me and my children—I have three daughters and one son—sons are less likely to have the disease than daughters, but their risk is not 0%. For your information, here are the family relations and my history that made me a candidate. 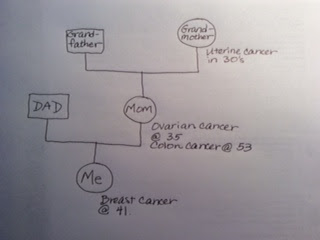 In women, breast cancer has been linked to certain ovarian, melanomas, and pancreatic cancer with ovarian cancer being the most often diagnosed disease. For men, prostate cancer becomes a possibility.

Since my mother had ovarian cancer at age 35, and I was diagnosed with breast cancer at age 41, our young ages turned on alarm bells to pursue further testing. My mother’s ovarian cancer could be related to her mother’s uterine cancer. However, my cancer is most likely not linked to my grandmother’s uterine cancer but could be linked to my mother’s ovarian cancer. So, there are two reasons to proceed with further testing on me especially now that testing can find that third defective gene.

Confused? I hope not. But, if you are keep in mind, genetics is complicated.

Inheritable genes can come down on the father’s side as well. In my case the diseases that people have had on that side of my family do not indicate any possible inherited gene related to my breast cancer. For me my mother’s side holds the only possible connection to an inherited condition.

Since every cell has the same DNA, testing for a genetic link to my cancer can be done by sequencing the genes in my blood cells. Before my infusion on Monday—infusion #54 of Kadcyla (TDM-1)—two vials of blood were filled to be sent to a lab for testing.

In my case the geneticists will be looking at 19 genes that could have played a role in my breast cancer. The only one that could be targeted for treatment currently is the PALB2 where a PARP inhibitor could possibly be used in my treatment plan.

Because the likely hood of inheriting a defective BRCA gene is low, most results from this type of testing are negative. Positive results are small and results of unknown variants are small as well. An unknown variant result means no one knows if that information has any significance to a person’s diagnosis of cancer. It could be important in the future, especially to offspring, but for now it is filed away to be brought forth if it shows up again in another person’s DNA sequencing.

The geneticists that accompanied the counselor explained to me the company Invitae that will be handling my genetic test believes in making data accessible to all researchers. This allows all research facilities to work together to determine if any variants found might in the future be connected to breast cancer. The geneticist made a great case for why data sharing is important among scientists as opposed to companies keeping data in silos making any data inaccessible to other scientists as well as to patients. Hiding the information slows down progress and hurts current and future patients.

I will have the results in three to four weeks and will provide an update then.

I must say, this waiting is far easier than the waiting for the results of a scan.