A Hashtag for Research

A new hashtag keeps meeting my eyes while I stumble around social media trying to keep up with the news in our world. The hashtag of which I am referring to is: #kissthis4mbc. I have been struggling with it. Struggling to figure out if this is a good idea or another feel-good marketing tactic. I wonder: will this actually help the metastatic breast cancer community?

On Facebook, Twitter and Instagram, the #kissthis4mbc social media campaign was launched to raise money for metastatic breast cancer research. Find information about it here and here .

It began on September 15th, and is sponsored by one of the largest pharmaceutical companies in the world, Novartis. This Switzerland based company conducts cancer research, sells and manufactures many drugs including a few breast cancer drugs: Femera (letrozole) and Affinitor (everolimus) that helps estrogen positive patients in controlling their disease as well as Zometa (zoledronic acid) for strengthening bones when disease settles there.

The fundraising plan is simple. Novartis will give $10.00 for each selfie posted on social media with the hashtag, #kissthis4mbc @Novartis; you don’t have to have cancer to participate. The goal is to reach a minimum of $200,000. All monies raised will be given to two organizations that only fund metastatic research, METAvivor and the Metastatic Breast Cancer Network (MBCN).

Except . . . when I first saw “kissthis4mbc” on my Twitter feed, my initial reaction was: this doesn’t speak to me. The telling of metastatic breast cancer to “kiss this” I thought was targeting the young selfie-picture taking people with puckered lips motivated by girl power. That is not me. I am 52 and more of a “#dontignorestageIV” kind of person. I thought of it as another silly chain type activity avoiding the seriousness of this condition by over-shadowing it with “bad assery”. In the world of stage IV, bad asses kicking butt and taking names signifies a “gonna beat this” attitude which crosses the line into the false realm that someone can stop cancer just by being a bad ass. When said with such certainty I get annoyed because the one thing people need to know about stage IV is that it kills. No amount of “bad assery” will ever be enough to stop stage IV breast cancer.

At this point in my thinking, I had decided not to participate. Especially since I felt this selfie-taking in the name of “kiss this” had returned us yet again to the trivialization of this disease making it seem easy to overcome. Puckering up for funds brings all the cuteness back into a very un-cute disease. Why can’t anger fuel the fire to donate? Why can’t sadness be the driver behind people wanting to save others? It can, but the reality is no one wants to see an emaciated body ravaged by cancer because it is horrifying. Seeing young, middle aged and older women with smiling faces are definitely nicer to look at.

It wasn’t only the hashtag that was causing me to have problems with this campaign. I wanted to know why Novartis would want to donate $10 for every selfie posted with that hashtag on Facebook, Twitter and Instagram. Their fundraising goal of $200,000 is not anywhere close to the money needed for real advancement in metastatic disease. The real get out of the petri-dish and onto the final stages of a clinical trial proving efficacy can cost millions, even billions. I couldn’t rationalize in my mind why Novartis did not want to keep the money in-house for their own research. After all, from what I can find on their website, they are involved in many areas of cancer research including late stage breast cancers.

This hashtag campaign was looking like a feel good marketing plan done to spur a positive vibe for Novartis. Plus, the actor, producer, and now breast cancer activist Eva Longoria, the spokesperson for this campaign—who I had never heard of--would gain some good publicity for herself as well.

Self-promotion isn’t a bad thing. Most people and corporations must do it to stay popular. But done for the sole purpose of "look at us, we are great" bothers me. Novartis is most certainly promoting themselves in a positive way, but they are also planning to give the money raised to METAvivor and the Metastatic Breast Cancer Network . These organizations are committed to metastatic research, so a contribution to them is always a good thing. But, I wondered if this is the best way for Novartis to spend its money. Metastatic research is enormously expensive. METAvivor and the Metastatic Breast Cancer Network are small organizations. They cannot give as much money to researchers the way that Novartis can give to their research teams. I questioned whether dividing up the $200,000 between these two entities really would make an impact in the stage 4 breast cancer world.

All these questions swirling in my head brought me back to the year 2014 when I was in full-on research mode and wondering why advocates for stage IV disease were disgruntled by the Susan G. Komen organization. I learned the United States government’s National Institutes of Health and the Department of Defense’s cancer program gave enormous sums of money to researchers and laboratories in the millions of dollars. As I studied Komen’s website and the US government's involvement in cancer research the take away I gained from that investment of my time was Komen's main focus was on awareness, prevention and early stage detection while the US government handled the big extremely expensive stuff. I concluded that organizations like Komen and others provide help to small researchers and laboratories who are not able to secure those large dollar grants from the government. As these smaller laboratories do small-scale research, kept alive by these non-profits, they may eventually be able to compete and receive those enormous grants available through the government resulting in their research producing important knowledge that benefits the entire breast cancer community. Because of that despite my angst concerning breast cancer fundraising demanding that a fun-time-for-all must be had, and after the battle bots in my brain had returned to their corners, I began to change my thinking. I decided I could support the hashtag selfie-posting campaign.

I still dislike the hashtag. I do, however, want METAvivor and the Metastatic Breast Cancer Network to be able to grant a few more researchers money for their small projects. And, maybe one day the words “kiss this” said while a particular drug(s) chases the cancer in a patient’s body will destroy their cancer with the “bad assery” power of those two four-letter words and end this disease.

Here is my selfie so funds from Novartis will go to METAvivor and the MBCN. Will you help too? 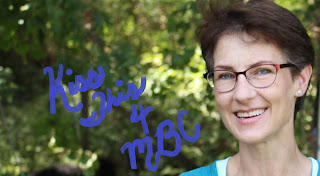 Posted by The Cancer Classroom at Sunday, October 01, 2017